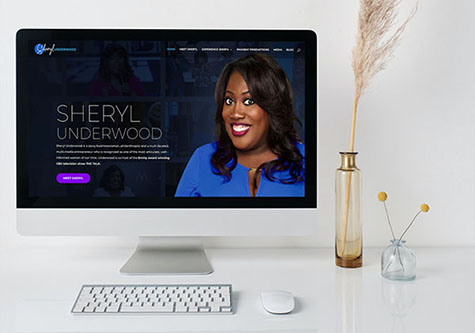 Sheryl Underwood is a savvy businesswoman, philanthropist and a multi-faceted, multi-media entrepreneur who is recognized as one of the most articulate, well-informed women of our time. Underwood is co-host of the Emmy award winning CBS television show THE TALK, watched by an average of 3+ million viewers per day and co-host of the 2017 and 2018 Daytime Emmy Awards show, is a much sought after entertainer and public speaker who is described as one of the world’s brightest contemporary humorists.

The Power of Support

One person, in addition to her beloved father, that Underwood credits with her success thus far is legal counsel and friend Lawrence J. Turner of Lawrence J. Turner & Associates in Sherman Oaks, CA. Underwood says “Larry and I have been together for a very long time. He is there at every turn and is, and has been, a major influence in my life and career. He is my advisor, my business manager, my lawyer and the voice of reason that I need.

Underwood is Owner and Chief Executive Officer of Pack Rat Productions, Inc. and is the 23rd International President of Zeta Phi Beta Sorority, Inc.; the only full-time entertainer to ever hold the sorority’s highest post. Underwood holds an Honorary Doctor of Humane Letters from Benedict College in Columbia, SC, South Carolina State University in Orangeburg, SC, the University of Illinois-Chicago andVoorhees College in Denmark, SC; is national spokesperson for Kimberly-Clark’s DEPEND brand Underwareness Campaign; creator and host of Sheryl Underwood Radio (Sheryl Underwood Radio is heard on over 339 radio affiliates with 14 million listeners by the combined reach of the signals strength of 339 affiliates) and recently launched Sheryl Underwood Radio – The APP and The World According To Sheryl Podcast. Committed to using her visibility and influence in positive ways, Sheryl Underwood is Founder & Chief Executive Officer of the Pack Rat Foundation for Education (PRFFE) and is currently raising money to support Historically Black Colleges and Universities (HBCUs) and the students committed to pursuing a higher education. Her life story was the subject of the TVOne bio-documentary UNSUNG Hollywood: Sheryl Underwood and she was recently named a Membership Ambassador for the NAACP.

Underwood, born in Little Rock, Arkansas, joined the television show THE TALK on CBS televisionfor the start of season two. She sits alongside hosts Sara Gilbert, Sharon Osbourne, Eve and Carrie Ann Inaba. With Underwood at the table, THE TALK, received its first Daytime Emmy for Best Talk Show and another Daytime Emmy for Outstanding Talk Show/Entertainment and multiple Emmy nominations. As a result of the success of the show Underwood’s contract has been renewed through the year 2021. In 2017, THE TALK received a record eight (8) Daytime Emmy Nominations, tying with TV host Ellen Degeneres. Underwood, who has received numerous awards and accolades, was named one of the 10 most influential talk show hosts on Twitter in 2012 and currently has over 1 million social media followers. As part of THE TALK hosting team, Underwood received a 2016 People’s Choice Award for “Favorite Daytime TV Hosting Team,” a 2016 NAACP Image Award for “Outstanding Talk Series” and a 2017 nomination in the same category, and is a KJLH (Los Angeles) Proven Achiever 2018 honoree. She is also the subject of an exclusive multi-page feature article in PEOPLE Magazine.

Underwood has been featured in Ebony, ESSENCE, Entertainment Weekly and in other major media outlets and has been a guest on numerous television programs including multiple episodes of the Emmy winning CBS daytime drama The Young and the Restless. She made her first of several scheduled appearances as the character “Diane” on the CBS comedy The Odd Couple and as “Emmy” on The Bold and The Beautiful; and she brings her signature personality and energy to Funny You Should Ask and Celebrity Name Game for multiple episodes. She and The Underwood Family are winners of Celebrity Family Feud, donating their winnings to the Zeta National Educational Foundation.

In 2013 Underwood was honored with the UNCF Masked Award at the UNCF’s Annual Mayor’s Masked Ball in Los Angeles, California. She, along with NBA Hall of Famer and entrepreneur Earvin “Magic” Johnson, were recognized for their support and donations that provided hope and opportunity to young people attending UNCF affiliated colleges and universities. She is an NAACP Membership Ambassador and the recipient of the Arch of Triumph Award presented by Johnson C. Smith University in Charlotte, North Carolina and is a member of the Board of Trustees for Benedict College in Columbia, South Carolina, the Board of Directors of the George Lopez Foundation, Pack Rat Foundation For Education, Inc., BUILD Community Development Corporation andthe National Executive Board, Zeta Phi Beta Sorority, Inc.

Through her service, philanthropy and excellence in business, Sheryl P. Underwood is a source of inspiration and wisdom for women, across the country and the world. She is a supreme model of what happens when you blend the Zeta principles of scholarship, service, sisterly love and finer womanhood in an effort to enhance her beloved sisterhood Zeta Phi Beta Sorority, Inc. and the world.

Let Us Help Increase Your Exposure

our use of images, screenshots or books on this website

This website designed by affordablewebsites.net a BBB Accredited Company